The Hopi and Tibetan Prophecies are Coming True 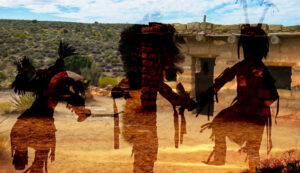 The Hopi and Tibetan Prophecies are Coming True

Traditional elders have a warning for the Western world. The long-lost connection between the Hopi & the Tibetan community, prophesied over 1,200 years ago by the great Tibetan, Master Guru Rinpoche, is being rekindled. He wrote an inscription, which was only discovered in recent years: “…when the iron bird flies, then the Red-Robed ones (Tibetans) will go to the red rocks and meet with the tradition there (Hopi) and unite again.” That time is here.

Hopi and Tibetans are spiritually and geographically connected; if you stick a pin through Hopi lands on the globe to the other side, you will find Tibet. During the Dalai Lama’s first visit to North America in 1979, he met with three Hopi elders. The spiritual leaders agreed to only speak in their Native tongues. Through a Hopi interpreter  the delegation head’s first words to the Dalai Lama were: “Welcome home” who laughed, and upon noticing the striking resemblance of turquoise around the elder’s neck to stones of his homeland, replied: “Where did you get your turquoise?” Later on, Chief Quamahongnewa  traveled to a Tibetan monastery to request prayers for the Hopi people from Guru Rinpoche and His Holiness the Dalai Lama.

Photographer Cyril Christo, who has spent time with Hopi elders, summarizes their prophecies: “At a time when floods and fires are spreading all over the world, it is worth paying attention to the teachings of the Earth’s preeminent dry farmers.”

Caretaking is at the center of Native peoples’ concerns for millennia. “They (native peoples) hold the universe in their hands,” as the elders exclaim. The Hopi have been trying to get their message to the United Nations for years, but their voices fall on deaf ears. Hopi prophecies describe this time of ‘Powateoni’, of purification, of social and ecological disruption will eventually bring a time of lasting peace over the world’s people. But before that, we will have to go through the eye of the storm.

The 1,200-year-old Tibetan Buddhist prophecy of ’The Shambhala Warrior’ tells of the rising of regular people who wish to bring about great change and healing through the powers of Compassion and Insight. Shambala is not a place, it exists in the hearts and minds of Shambala warriors. Check out this video about who are the Shambala warriors. They could include you.  https://youtu.be/hWJWZd2UMKw

Sorry, the comment form is closed at this time.