Workshop Did We Really Go To The MOON?” 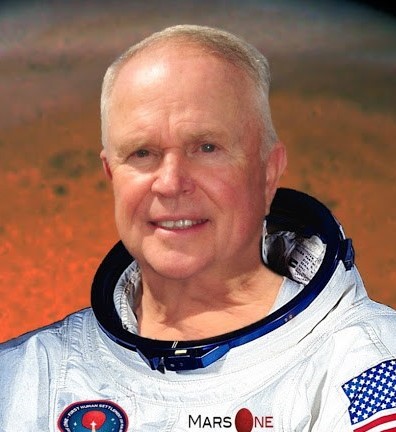 Dr. R. Ken Johnston, Sr. one of 4 Civilian Astronaut Consultant Pilots from the Apollo Moon Program, is a retired aerospace engineer, US Marine, and “NASA Whistle blower.” He refused to strictly follow orders and destroy a nearly-complete collection of 8″ x 10″ glossy photo-prints from the Apollo program, photos that are not available from NASA at this time and are of a higher resolution than what is found on-line. Johnston was born at Fort Sam Houston US Army Air Base in San Antonio, TX. 1942, and studied at Oklahoma City University. He enlisted in the US Marines in August, 1962 and reported to Pensacola as a Marine Officer Cadet for flight training in September 1964. He left active duty from the Marines in August 1966.

Johnston was hired by Grumman Aircraft Corp. because of his training as a pilot with an avionics background to become a principal contractor for the Apollo Lunar Module testing. His duty was to assist with cockpit and instrument development and Astronaut training at the Manned Space Center (to be renamed the Johnson Space Center) in Houston, Texas, as a “civilian astronaut consultant pilot.” Ken Johnston worked as a contractor from 1966 to 1972, during the Apollo Program, and he was employed by Brown & Root Northroup, principal contractors to NASA for management of the Lunar Receiving Laboratory, where all the moon rocks were stored, curated, cataloged and in some cases, distributed to scientists who had successfully applied to carry out analysis in their own labs.

An important part of Johnston‘s duty was to provide photographic and preliminary analysis of the lunar samples to the contributing scientists from around the world. The photographic documentation was to document the lunar samples exact location and orientation insitu. In addition to the photos he provided copies of the lunar sample information catalogs to the scientists. As such, he had in his office several sets of photographs taken by Apollo astronauts with their chest-mounted Hasselblad cameras. When the lunar sample distribution wound down, he was instructed by Bud Laskawa, his boss, to destroy what remained of the photo archive, but Johnston kept one set as a personal collection for a work portfolio.

Johnston applied to NASA for the 1977 astronaut selection for duty as a Space Shuttle astronaut, but was turned down because NASA wanted the astronauts to be PhD level scientists. The ideal astronaut was no longer a “jet-jock”, but men with scientific accreditation. When NASA was recruiting again, Johnston re-applied, but was considered too old. He did, however, join NASA’s educational outreach program as a “Solar System Ambassador” traveling and speaking to civic and youth groups about space exploration and careers in engineering and science.